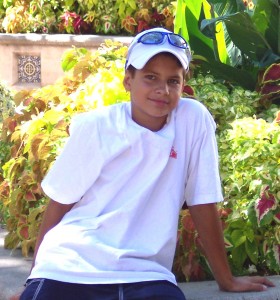 Bryan was a smart, strong, healthy, athletic 11 year old when he was first diagnosed with a Glioblastoma Multiforme (GBM) in his cerebellum in October, 2004. GBMs are one of the most aggressive brain tumors and very difficult to treat.

Throughout his treatment, initial surgery followed by radiation and chemotherapy, Bryan never complained. He had occupational therapy to regain his right-hand abilities to write and eat. He had physical therapy to re-learn how to walk and run. He was able to play lacrosse and basketball again in the Spring of 2005. But most of all he just wanted to be a “regular kid”.

In July 2005, Bryan had a recurrence and gallantly fought through another surgery and a number of months of several different chemotherapies. In the Fall, he began to have increasing difficulties walking, talking, eating and swallowing. Eventually breathing issues required him to have a tracheostomy and be on a ventilator, but he never gave up hope. Bryan’s family was blessed and thankful to have him home for Christmas, but, sadly, he ultimately lost his battle against this very aggressive disease in January, 2006 at the age of 12.

Bryan was an inspiration to everyone who met him. He truly appreciated the never ending support of his family & friends, classmates, school, community and church and always wanted to do something to give to others. We are striving to honor Bryan and his all-too-short life by carrying it forward and fulfilling his dream through Bryan’s Dream Foundation.